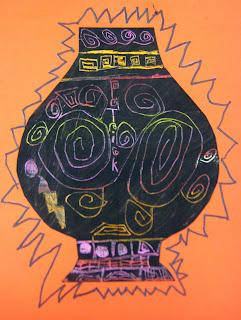 After seeing this once or twice on some other sites, HERE and HERE, I decided to give it a try myself.
On the first day 2nd graders were introduced to greek history, greek pots, and the terminology used to describe the major elements of a pot (mouth, neck, belly, and foot). We then reviewed warm vs. cool colors and talked about the warn colors used in greek pots.
I then introduced them to symmetry. For this part I stand infront of the room to do a little symmetrical/asymmetrical dance. If I hit a symmetrical pose they put up one finger and if I hit an asymmetrical pose they put up two fingers.  (I have them join in if we have extra time at the end of a class and they love it!)
Once we have the basics down I have them fold a large piece of white paper in half, place a dot at the top and a dot near the bottom. They use their knowledge of the elements of a vase (mouth, neck, belly, and foot) to create a drawing along the fold. Once they have a vase idea on the paper they keep it folded and cut carefully.
For the rest of class we begin coloring our vase in a thick waxy layer of warm colored crayons. 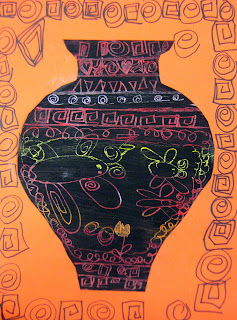 Day Two: finish coloring with crayon and then paint over entire vase with black tempera using a flat foam brush to get an even coat. With the last minutes of class I review pattern and show them a couple shapes that repeat on greek pottery quite a bit. they them complete a pattern worksheet and come up with some designs and pictures they want to scratch into their vase. 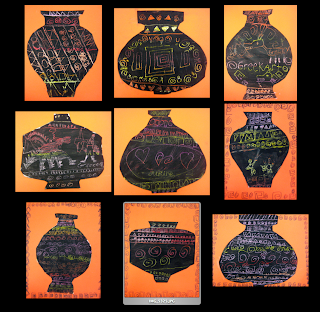 Day 3: Scratch day! Finally we got to what we had been waiting for! First I had them scratch three lines  about a half inch apart on the top of their page and again at the bottom. In those spaces they scratched their favorite patterns or designs. The belly of the pot was a space they could scratch in more freely.
Posted by Katie at 4:06 PM

Katie
Washington , United States
I'm an art educator currently in my third year! I began as an elementray art teacher and now work in a middle school teaching 2D and 3D art in addition to photography, graphic design, ceramics, and video productions. Look back through my blog history and hopefully you will be inspired to try a project I have done. It is my hope that through blogging I can connect with other art educators and discover new approaches to various projects. Along the way I hope that my discoveries in teaching and art inspire those who may stumble upon my blog!!!